50 Years Ago in Hawaii

Hawaii (and the rest of the world) was a very different place back in the late ‘60’s – with air travel booming and surf culture gaining popularity, Hawaii was the place to be. Tourism replaced the sugar and pineapple industries as major revenue producers and construction was everywhere. Royal Kona Coffee began roasting premium 100% Kona and Kona Blend coffees back in 1968/69, so we thought to celebrate, we would take a look back at life in the Aloha state 50 years ago.

Jack Lord and crew brought a different view of Hawaii to the nation when the popular show debuted in the 1968/69 TV season, bringing scenes of a grittier kind of island life into homes across the country. The original series was the first American crime show to run for more than a decade and showcased numerous locations and buildings, including the Ilikai hotel in Waikiki. With its exotic appeal, island style and action the series left a lasting impression on pop culture.

Lord remained a lifelong resident of Hawaii and a pillar of the community. He and his wife left a fortune of about $40 million to various Hawaii-based charities, and he is commemorated with his own bust near Kahala mall in Honolulu.

A New State Capitol for the Newest State

In 1968, the New Hawaii State Capitol building was completed, and subsequently opened in 1969. The state government officially moved out of Iolani Palace. The building is one of a series of notable buildings in the “Hawaiian International Architecture” style of Bauhaus, a noted modern architectural movement. Surrounded by a shallow pool representing the Pacific Ocean and pillars representing each of the main islands – the capitol building is just one of many notable buildings in Honolulu (and Hawaii) and is well worth visiting in person. 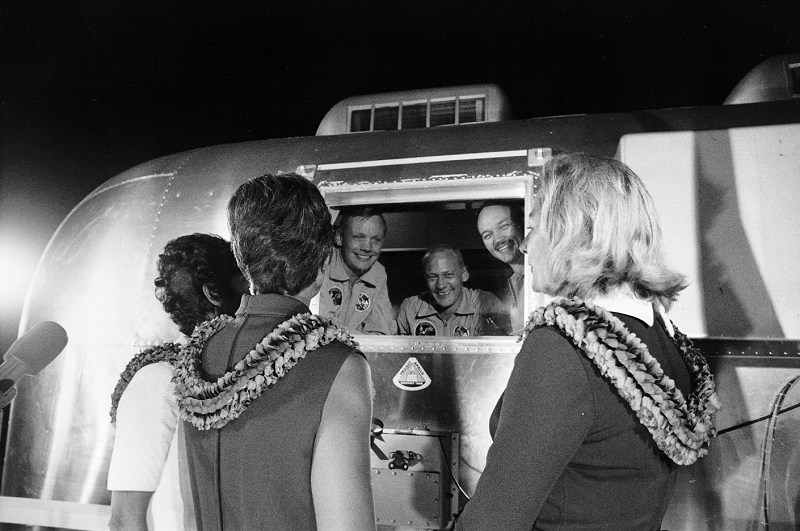 In 1969, after mankind’s first walk on the moon, the Apollo 11 Astronauts landed in the pacific and were taken to Hawaii – where they had to pass through customs!  They noted their departure from Cape Canaveral and arrival in Honolulu – via the moon – and declared moon rocks and moon dust! Buzz Aldrin tweeted a photo of the forms back in 2015. 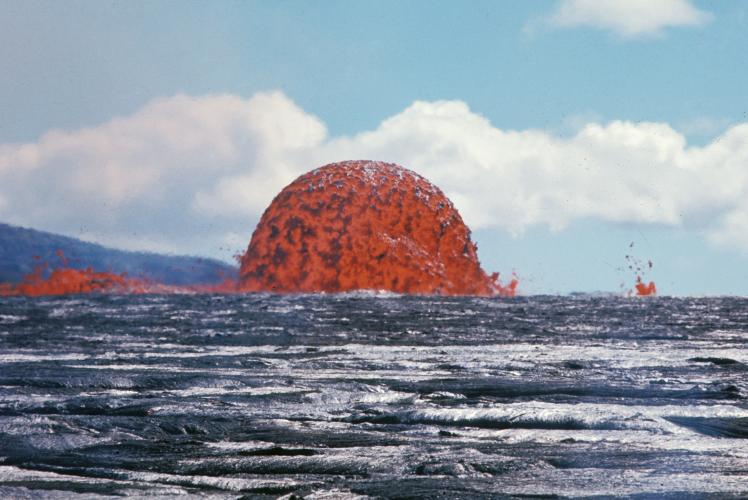 Kilauea began a major eruption cycle in 1969 in the Mauna Ulu rift eruption. The eruption was dramatic and began a cycle that lasted 5 years, displaying huge lava fountains, lava falls, and even an enormous lava dome.

One of the most famous figures of modern Hawaii, Duke Kahanamoku, died in January 1968. A renowned waterman and beach boy once considered to be the fastest swimmer alive, Duke’s initial fame arose as a gold medalist in the 100-meter freestyle in the 1912 Summer Olympics in Stockholm. En route to the Olympics he gave surfing demonstrations in California that reignited interest in the sport. He was instrumental in popularizing surfing around the world, travelling and giving demonstrations around Europe, the USA and Australia.

The First McDonald’s in Hawaii Opens

As folks in Hawaii know, we often don’t get all the same shops and restaurants that are common in other American states due to the challenges of long-distance transportation. In 1968, McDonald’s brought the Big Mac to Hawaii with its first location. The coffee of choice for McDonald’s in Hawaii was Royal Kona -in fact you can find our coffee being served in all McDonald’s across Hawaii to this day. Mahalo, McDonalds!

After realising the potential of marketing Kona Coffee worldwide, in 1968 Superior Coffee acquired a local roaster and established the Royal Kona Coffee brand. With huge investments in quality control, processing and packaging (vacuum packed canned coffee at the time was state of the art), the demand for Kona Coffee soon exploded (much to the delight of Big Island farmers!) and we have been roasting the finest 100% Kona and Kona Blends ever since!

After decades establishing Kona Coffee worldwide and becoming the coffee of choice served in Hawaii’s prestigious hotels and restaurants, Royal Kona subsequently became part of Hawaii Coffee Company when it merged with Lion Coffee in 2000. As the largest roaster of Kona Coffee in the world, we are proud to continue serving you a quality cup of Aloha!